I’ve been hoping for edge creased Catmull-Clark subdivision in game engines ever since I started using Modo about 10 years ago.
I previously made a tool to build LODs from sub-d surfaces in Unity, just to have some way of getting a sub-d like mesh in engine. Super expensive LOD meshes…
This was not a very useful thing to do.

There are a few games out there using real-time sub-d, including the folks at Activision who have demonstrated CC sub-d with creases in a game engine:

It is unclear if they shipped edge-creasing in any of their released games, but they definitely use CC subdivision surfaces.

And sure, technically there has been real-time subdivision in games going back to TruForm on ATI cards in the early 2000s, and probably before then for all I know, but I’m specifically interested in Catmull-Clark sub-d, and specifically edge creasing 🙂

Creasing gives you control over the sharpness of edges, without having to manually bevel all of your edge loops.
This is nice for keeping a low poly mesh, but also allows you a little more flexibility.
For example, if you come back and change the model, you don’t have to un bevel and re-bevel edges.
If you bake out a normal map, and decide the bevels aren’t quite wide enough, you can just change the crease value and re-bake.

Here are some loops on my wheel model that are heavily creased: If I were to bevel those edges instead, my base model would go from 3924 vertices to 4392.

If I removed creases across the whole model, and beveled all the edges to get the same end result I’d need a base mesh around 6000 vertices (2000 vertices more than the creased version).

For the sake of showing how much work the creasing is doing for me, here is the base model vs Sub-d vs Creased Sub-d:

I’m not likely to be able to implement the Call Of Duty approach myself, so I’ve done something far more hacky, but slightly less gross than my previous Unity attempt 🙂

My new method is:

It’s very expensive from a memory point of view (and probably performance for that matter), so this is not something you’d want to do for a game, but it does show off how nice creased sub-d would be in UE4 🙂

First up, here’s the un-subdivided model in Modo: 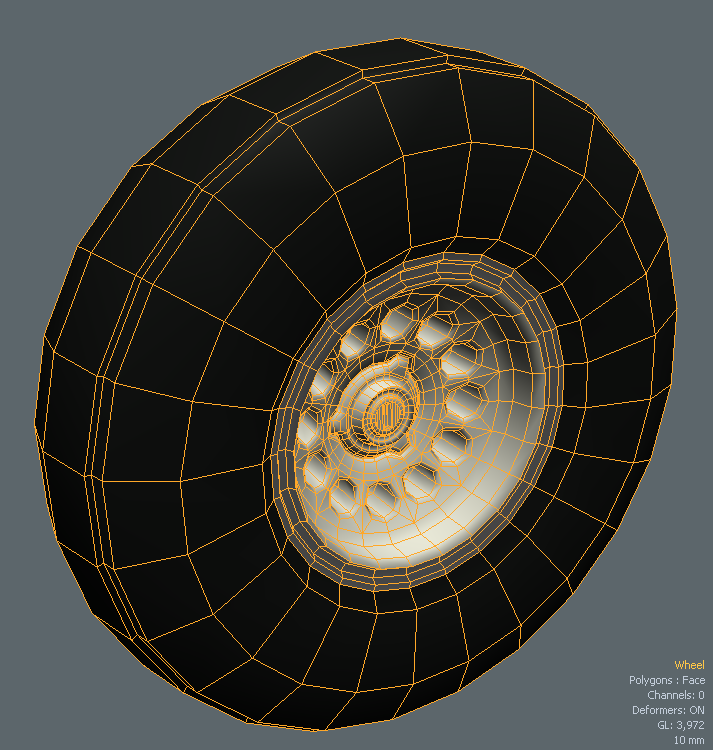 And this is the edge weighting view mode in Modo, so you can see which edges are being creased: 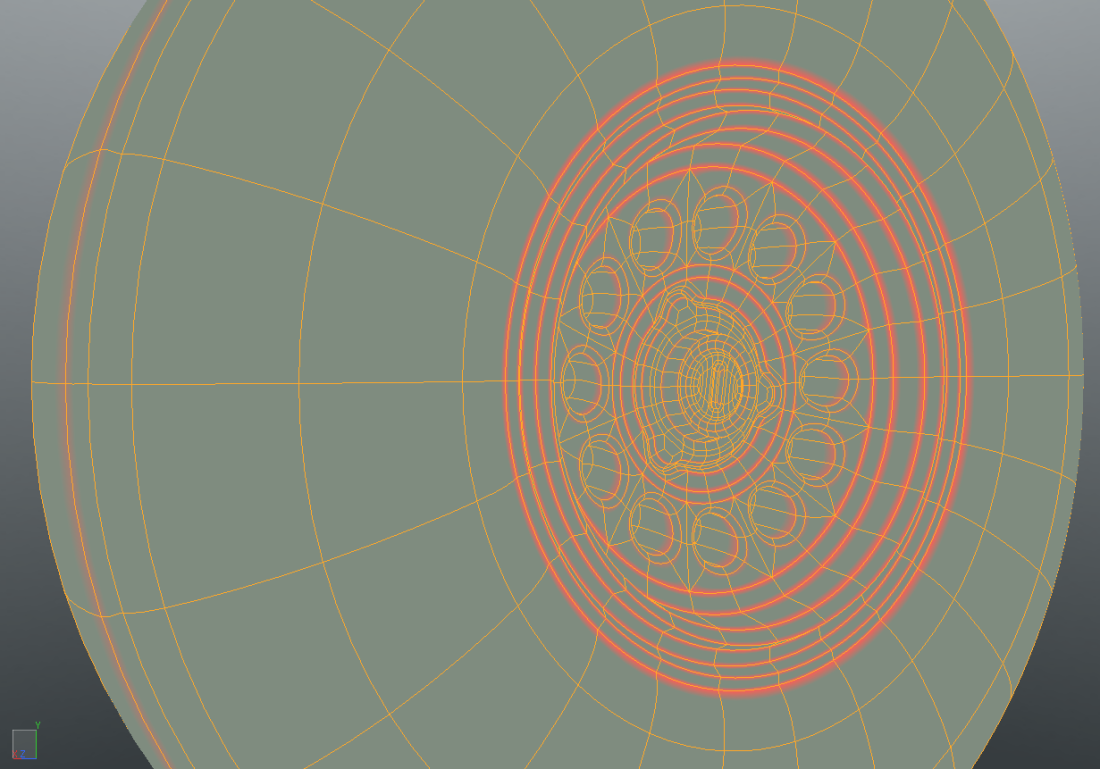 There are two things I want to bake out of Houdini: A vector displacement map and a normal map.
I’m not baking this data by projecting a high poly model onto a low poly, I don’t need to because the high poly model is generated from the low poly, so it has valid UVs, I can just bake textures straight out from the high poly. 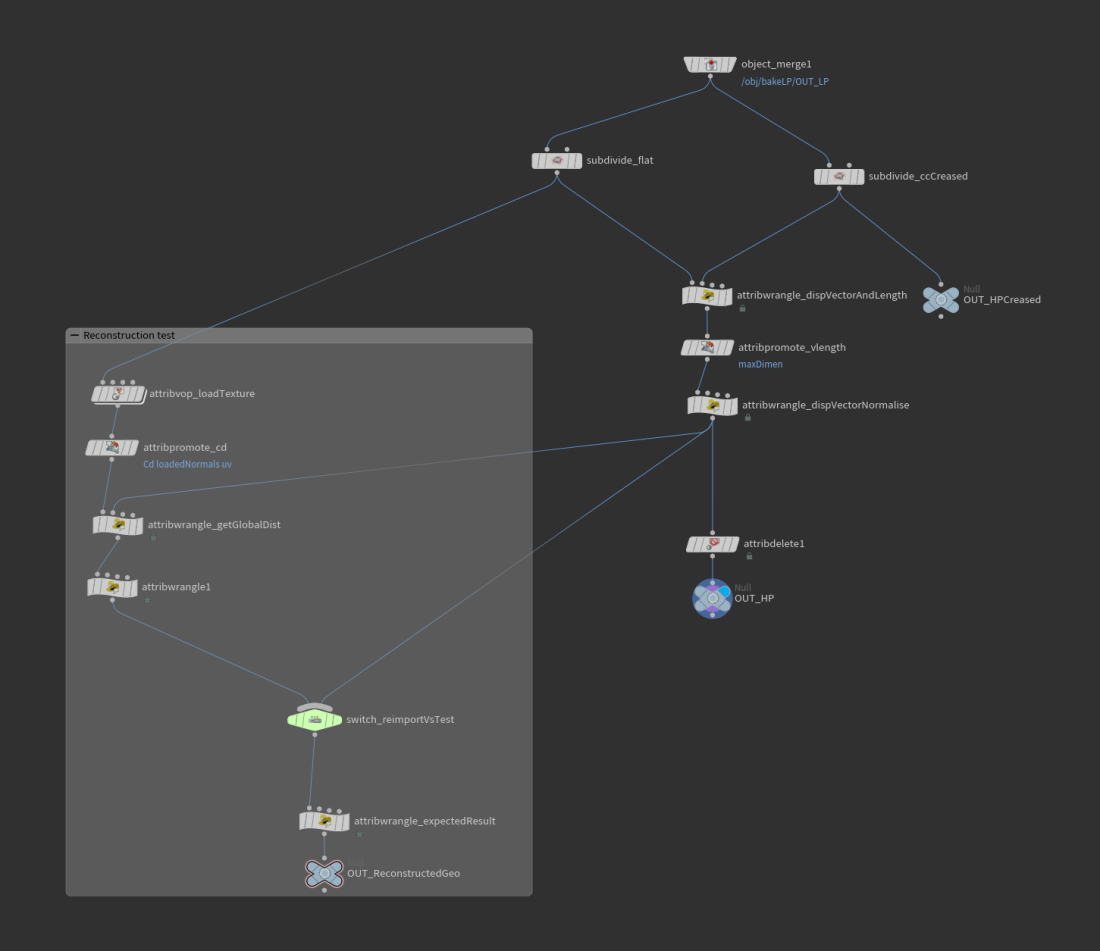 The right side of the graph, there are two Subdivide nodes.
The Subdivide on the left uses “OpenSubdiv Blinear”, and on the right is “OpenSubdiv Catmull-Clark”, and they are both subdivided to a level of 5, so that I have roughly more vertices in the meshes than pixels that will get baked out:

The “bilinear” subdivision is pretty close to what you get in UE4 when you use “flat tessellation”. So what we want to do is work out how to push the vertices from the left model to match the right model.
This is very easily done in a Point Wrangle, since the point numbers match in both models 🙂

Or if you’d prefer, as a Point VOP: 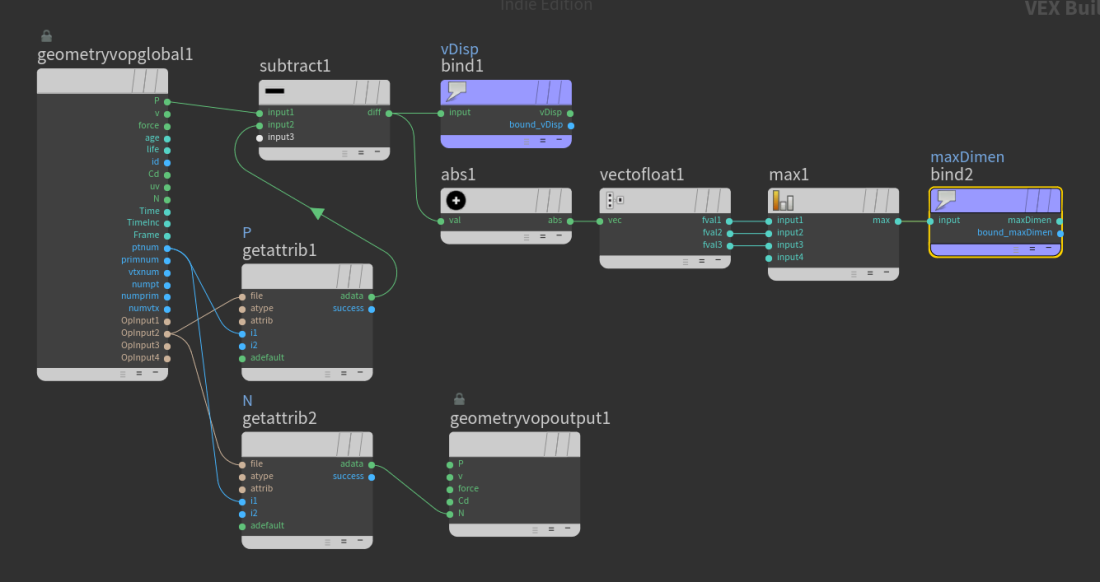 When I save out the vector displacement, I want it in the 0-1 value range, just to make my life easier.
So in the above Wrangle/VOP I’m also working out for each Point what the largest dimension is (maxDimen).
After the Wrangle, I promote that to a Detail attribute (@globalMaxDimen) using the Max setting in the Attribute Promote SOP, so that I know the maximum displacement value across the model, then use another Wrangle to bring all displacement values into the 0-1 range:

The displacement is now stored in Point colour, in the 0-1 range, and looks like this: Bake it to the limit!.. surface

You might have noticed that the Normals and Displacement are in World space (since that’s the default for those attributes in Houdini).

I could have baked them out in Tangent space, but I decided for the sake of this test I’d rather not deal with tangent space in Houdini, but it’s worth mentioning since it’s something I need to handle later in UE4.

To bake the textures out, I’m using two Bake Texture nodes in a ROP network in Houdini. 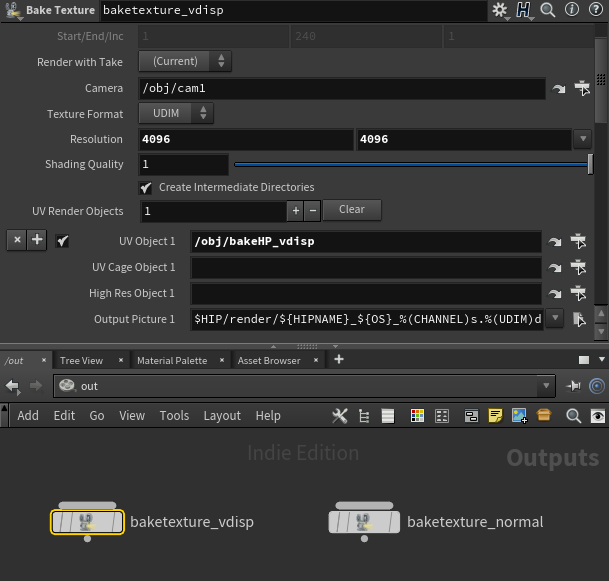 I’ve only changed a few settings on the Bake Texture nodes:

And what I end up with is these two textures: 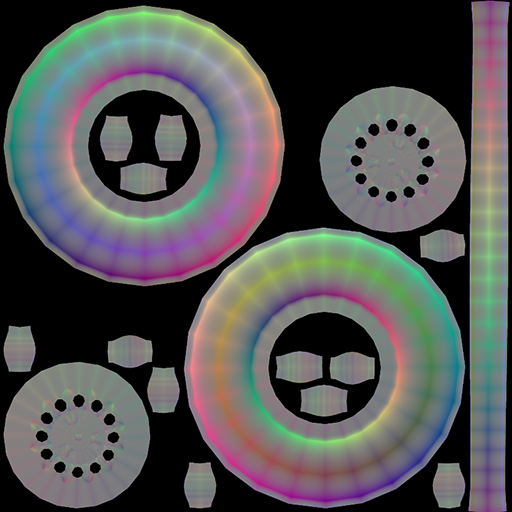 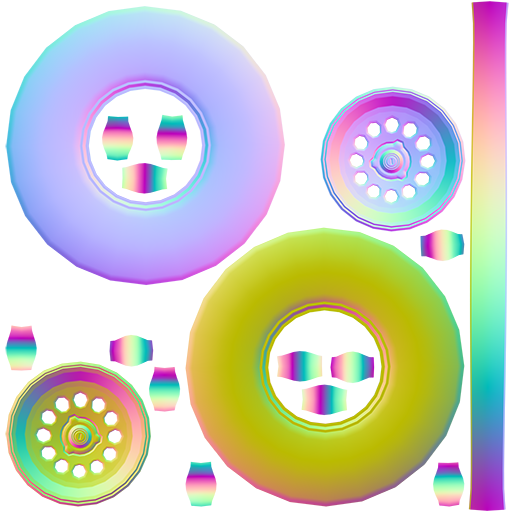 I bake them out as 4k, but lodbias them down to 2k in UE4 because 4k is a bit silly.
Well, 2k is also silly, but the unwrap on my model is terrible so 2k it is!

If you look back at the main network, there is a section on the left for testing:

I created this test part of the network before I jumped into UE4, so I could at least validate that the vector displacement map might give me the precision and resolution of data that I would need.
And also because it’s easier to debug dumb things I’ve done in a Houdini network vs a material in UE4 (I can see the values of every attribute on a vertex, for example) 🙂

I’m taking the flat tessellated model, loading the texture using attribvop_loadTexture, copying the globalMaxDimens onto the model, and then the attribwrangle_expectedResult does the vector displacement.

The attribvop_loadTexture is a Vertex VOP that looks like this: 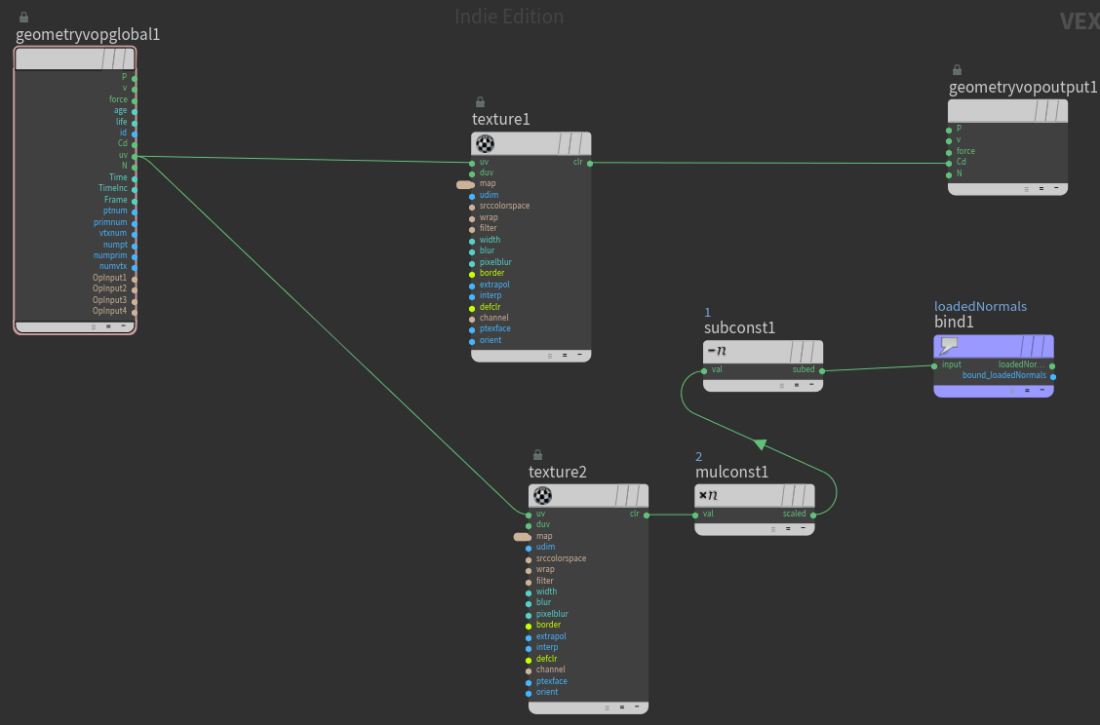 This uses the Vertex UVs to look up the vector displacement map texture, and stores the displacement in vertex colour (@Cd). It also loads the object space normal map, and moves it from 0-1 to -1 to 1, and binds it to a temporary loadedNormals attribute (copied into @N later).

Then at the end of the network, the expectedResult wrangle displaces the position by the displacement vector in colour, using the globalMaxDimen:

If you’re wondering why I’m doing the (0 –> 1) to (-1 –> 1) in this Wrangle, instead of in the VOP (where I did the same to the normal), it’s because it made me easier to put the reimportUvsTest switch in.
This (badly named) switch allows me to quickly swap between the tessellated model with the displacement values in vertex colour (before bake), and the tessellated model that has had that data reloaded from texture (after bake), so I can see where the texture related errors are:

There are some errors, and they are mostly around UV seams and very stretched polygons.
The differences are not severe enough to bother me, so I haven’t spent much time looking into what is causing it (bake errors, not enough precision, the sampling I’m using for the texture, etc).

That’s enough proof in Houdini that I should be able to get something working in engine, so onwards to UE4!

In UE4, I import the textures, setting the Compression on the Vector Displacement Map to be VectorDisplacementmap(RGBA8), and turn off sRGB.
Yay, 21 Mb texture!

I can almost get away with this map being 1024*1024, but there is some seam splitting going on: That might be also be solved through more aggressive texture Border Expansion when baking, though.

Here is what the material setup looks like (apologies for the rather crappy Photoshop stitching job on the screenshots, but you can click on the image to see the details larger): 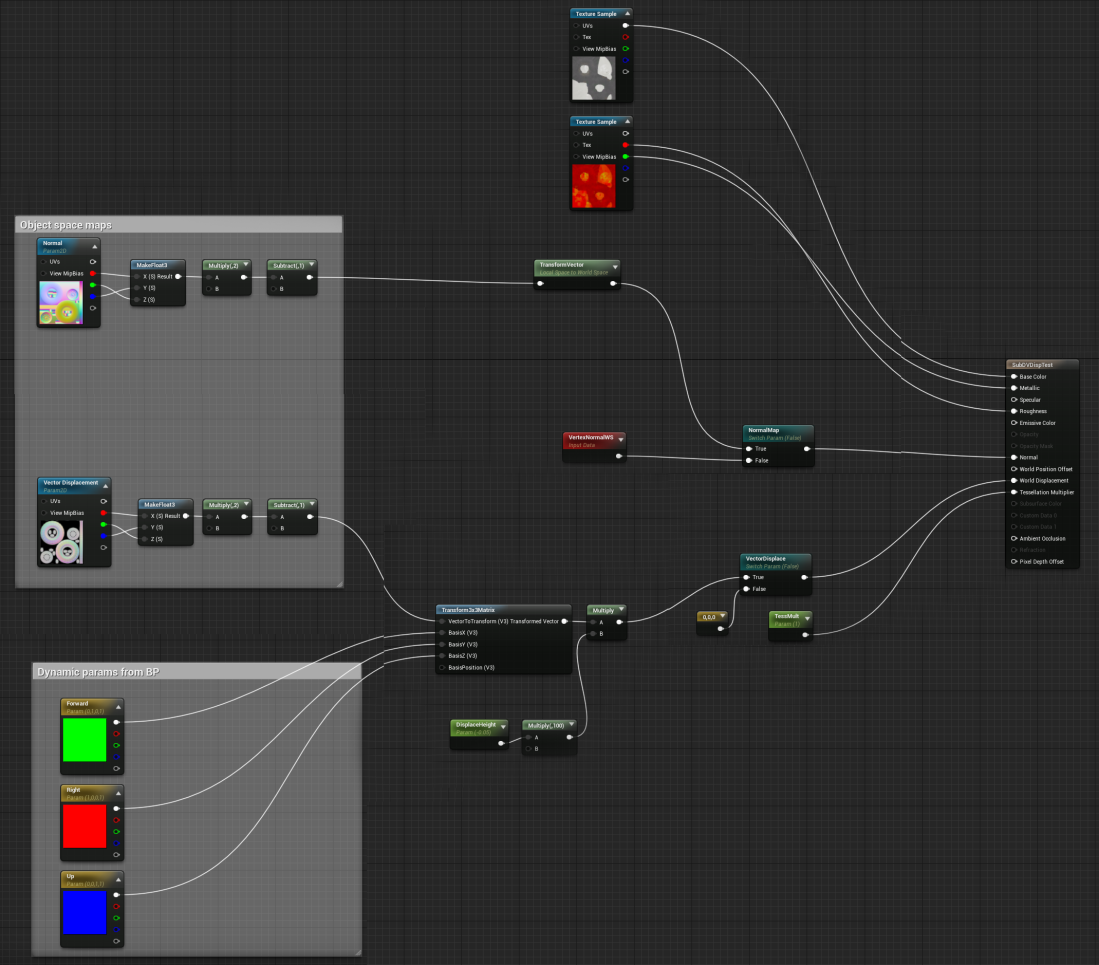 The value for the DisplaceHeight parameter is the @globalMaxDimen that I worked out in Houdini.

Since both textures are Local (Object) space, I need to shift them into the right range (from 0-1 to -1 to 1), then transform them into World space (i.e, take into account the objects rotation and scale in the scene, etc).

The Transform node works fine for converting local to world for the Normal map.
I also needed to set the material to expect world space normals by unchecking Tangent Space Normal: 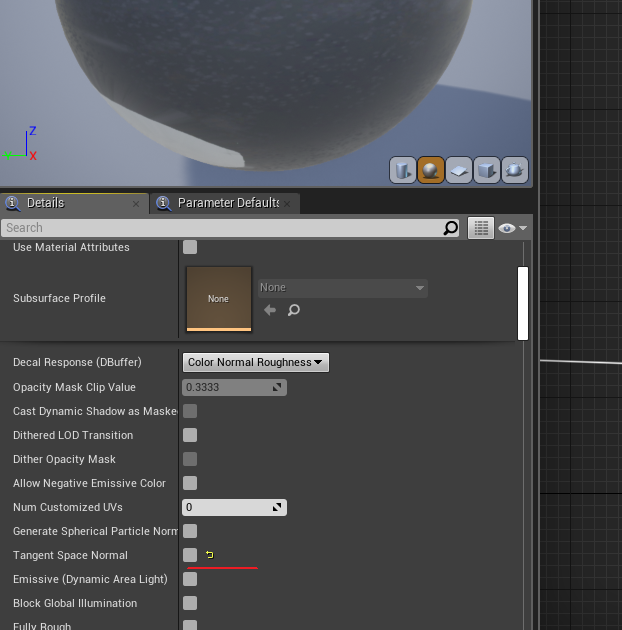 The Transform node works fine for normal maps, but does not work for things that are plugged into World Displacement.
Tessellation takes place in a hull / domain shader and the Local -> world transformation matrix is not a thing it has access to.
To solve this properly in code, I think you’d probably need to add the LocalToWorld matrix into the FMaterialTessellationParameters struct in MaterialTemplate.usf, and I imagine you’d need to make other changes for it to work in the material editor, or you could use a custom node to access the matrix.

If you look back at my material, you can see I didn’t do that: I’m constructing the LocalToWorld matrix from vectors passed in as material parameters.
Those parameters are set in the construction script for blueprint for the object: 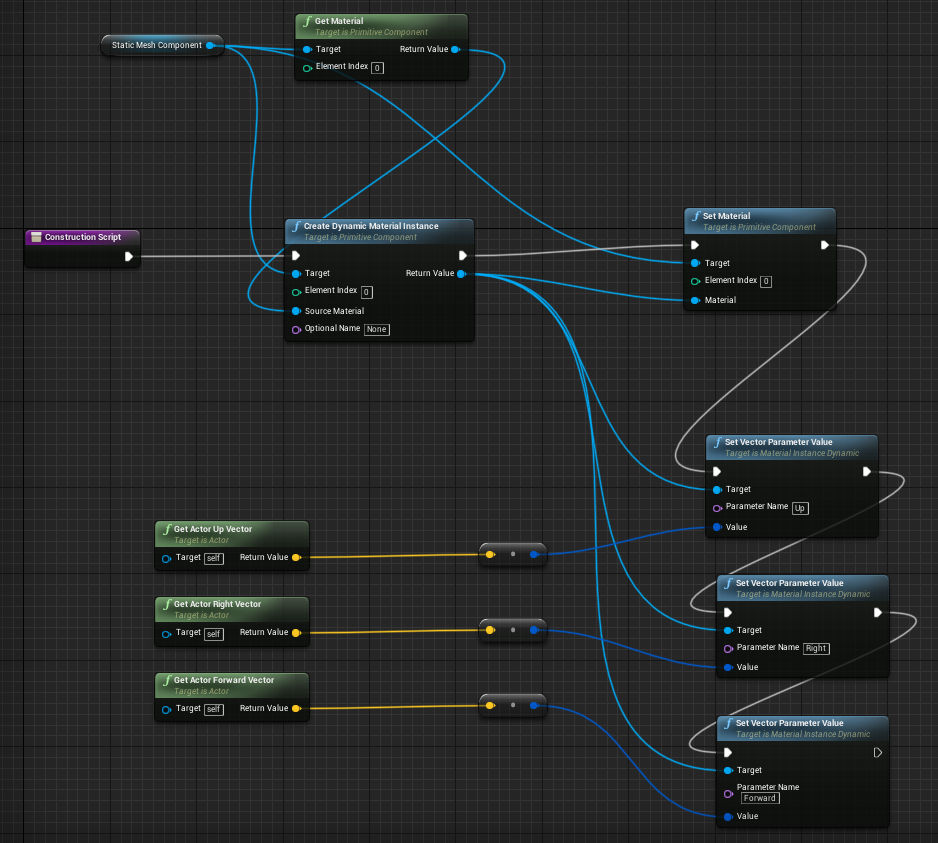 I’m creating a dynamic material instance of the material that is on the object, applying this new instance to the object, and setting the Up, Right and Forward vector parameters from the Actor. These vectors are used in the material to build the local to world space matrix.

If I wanted the object to be animated, I’d either need to do the proper engine fix, or do something nasty like update those parameters in blueprint tick 🙂

Please ignore the albedo texture stretching, I painted it on a medium divided high poly mesh in Substance Painter, probably should have used the low poly (something for me to play with more at a later date).

This is with a directional light and a point light without shadows.
As a side note, Point Light shadows don’t seem to work at all with tessellated objects in UE4.

Spotlight and directional light shadows work ok, with a bit of a caveat.
They use the same tessellated mesh that is used for the other render passes, so if the object is off screen, the shadows will look blocky (i.e, it seems like tessellation is not run again in the shadow pass from the view of the light, which probably makes sense from an optimization point of view):

And that’s about it!

Seems like a lot of work for something that is not super useful, but it’s better than my last attempt, and being built in Houdini it would be very easy to turn this into a pipeline tool.

For lots of reasons, I’m skeptical if I’ll ever work on a project that has Catmull-Clark creased sub-d, but at least I have a slightly better way of playing around with it now 🙂